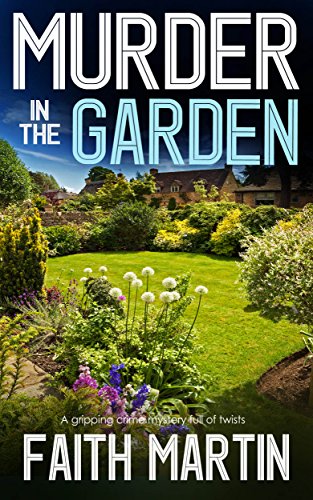 Looking for a brilliant best-selling murder mystery with a feisty female detective?

Meet DI HILLARY GREENE, a policewoman struggling to save her career and catch criminals.

Edward Philpott is found bludgeoned to death with his own spade in his beautiful garden. He lived with his daughter Rachel and his two grandchildren.

Hillary’s only lead is a rival from the village flower show who used to argue with the victim about the size of their vegetables. But what dark secrets from the past and present does this village hold?

Hillary has returned to work after the slaying of her boss and is desperate to track down his murderer. His pregnant widow is even more determined to get revenge, but will she go too far?

Can Hillary cope with two complex investigations full of extreme emotions, one of which is very close to home?

This is a crime mystery full of well-observed characters, which will have you gripped from the start to the absolutely heart-stopping conclusion.

MURDER IN THE GARDEN is the ninth in a series of page-turning crime thrillers set in Oxfordshire.

What readers are saying about MURDER IN THE GARDEN
“Another highly enjoyable read.” Misfits Farm

“It starts at page one by getting you hooked and unable to put it down.” Viv

“Kept me glued to the book.” Barbara

“It is one the best police procedural series I have ever read.” Jennifer Copeland

THE LOCATION
The traditional and world-famous English country cottage garden. A beautiful and ornamental front garden, with a back garden given over to growing fruit and vegetables. Surrounded by hedges and an ancient wall, in summer it would be full of bees, birdsong, wildlife, and colourful flowers, complete with greenhouse, shed, compost bins and lawns.

THE DETECTIVE
DI Hillary Greene
An attractive woman in her forties, Hillary Greene is a police officer of many years’ experience, and came up through the ranks. Consequently, she knows how the system works, and is fiercely loyal to the force without being blinkered to its faults. Popular with the rank and file for her no-nonsense attitude and competence.

PLEASE NOTE THIS IS A REVISED EDITION OF A BOOK FIRST PUBLISHED AS “ACROSS THE NARROW BLUE LINE.”

Books 10-17 coming soon!
Join the Joffe Books mailing list to be the first to hear about new releases.