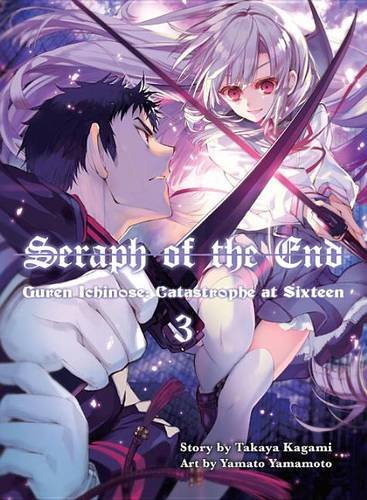 A 'LIGHT NOVEL' PREQUEL TO THE HIT MANGA SERIES!

A dark supernatural high-school drama, SERAPH OF THE END provides the basis for the best-selling Shonen Jump manga, and rides the wave of 'light novels' currently taking Japan by storm.

Class and social standing has torn lovers Glen and Mahiru apart, but nothing, not monsters, or wizards, or vampires, or even blood will keep these two teens apart in this supernatural high school action romance.

The SERAPH OF THE END light novel is the basis for the best-selling Shonen Jump manga.

Review
"Yamamoto's black-and-white illustrations are eye-catching and powerful, capturing architectural details of crumbling cities, extreme close-ups of conflicted characters, explosions and fight scenes with equal skill. By the end of this story, readers will be eager to get to the next titles in this series to find out what will happen." --School Library Journal


Takaya Kagami is a prolific light novelist whose works include the action and fantasy series A Dark Rabbit Has Seven Lives, which spawned a manga and anime series, as well as The Legend of Legendary Heroes, which has also been adapted into manga, anime and a video game.
Since 2003 Yamato Yamamoto has been working as a cartoonist and illustrator for one of the world's biggest brands Shonen Jump. She has drawn six series of her own, including Seraph of the End Vampire Reign (Viz Media), and has provided illustrations for 20 light novels from ten different publishers.